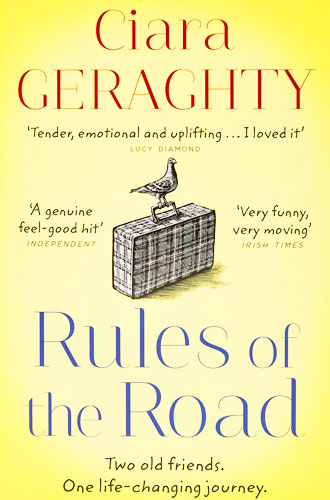 Rules of the Road

Terry Shepherd has been married for 25 years and is a stay-at-home mother to two daughters who no longer live at home.

Her father, Eugene, still thinks he is a taxi driver. The truth is that all he can remember for sure are the rules of the road.

Iris Armstrong is a woman who decides what she wants and then goes ahead and gets it. For reasons that Terry still doesn’t really understand, Iris, the head of the Alzheimer’s Society where Terry volunteers, decided that she and Terry would be friends. So Terry and Iris became friends.

Iris refuses to allow her MS define her until the day she realises that it will. And soon. She makes her plans.

The story opens with Terry discovering Iris’s plans to travel to a clinic in Zurich to end her life. Terry, who is minding Eugene that day, rushes to catch up with Iris and insists on accompanying her.

The trio set off. Terry is determined to change Iris’s mind. Iris is determined to realise her plan. Eugene sits in the back seat and reminds Terry how important it is to check her blindspot.

As Terry drives her friend and her father through England, France and Switzerland, she will discover things about her marriage. Her children. Her life.

But mostly, she will discover herself, hiding in the tall grasses of her life. A place where she has felt safe. A place that grows smaller and smaller the farther away she drives.

The story is told from Terry’s point of view, over six strange, intoxicating days. It should be the worst time of Terry’s life. It turns out to be the best.